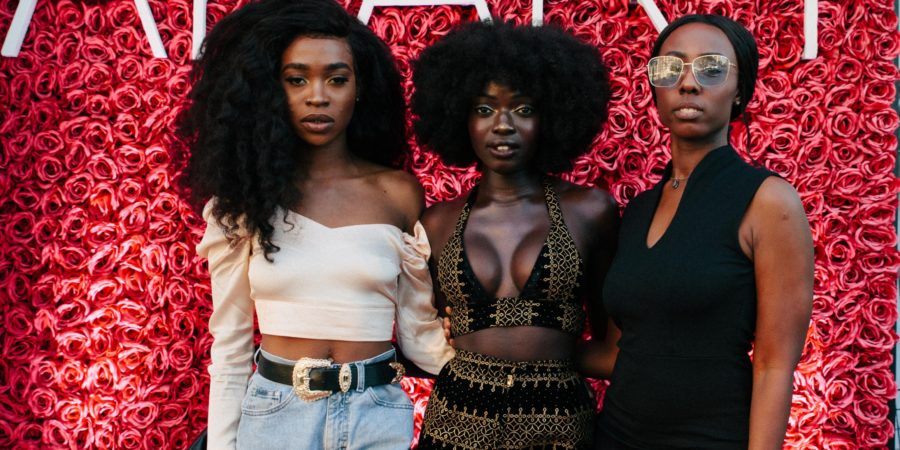 Since the time I handled an intricate guest list for some of LA’s top industry influences in the world of fashion; overseeing castings and doing a walk through for LA fashion weeks runway shows, I’ve seen a huge shift in how LA has taken something that was once so authentic, so qualified and so dignified and making it into a playground for sandlot shenanigans.

I have since taken a fourth row seat observing and watching what was once a tenacious goal that seemed unattainable turned into a free for all with little to no effort in gaining access to. One of the most notable times of the year, that has traditionally served as a two season course meal, is now a yearly side show act that has allowed just about every grifter to seek what stripes they have not earned. Instagram “models”, “influensters”,  club kids and such have body snatched the industry by storm and continues to leave a stale aftertaste in my mouth. Although we’ve had to reluctantly faced this new day and age, there’s still that glimmer of hope that tradition and sophistication is still alive, and fully alert in the eyes of the fashion taste makers.

Two years ago, I had the pleasure in attending a private show room pop-up in Downtown where I would find myself in the mist of Italian fashion in all its cultivated class and style. It was refreshing and much needed as they made their mark in the city of Los Angeles to highlight what genuine fashion is primarily about. Clearly, being in the elite circle of the big four fashion capitals of the world, it’s no brainer that Apart  would show Los Angeles how it’s truly done.

As I received an invition from the chamber of commerce for Italy-America, my-self and two friends, Nneka Ibeabuchi  and Soukeyna ,were able to socially mingle during an intimate preview for the FW2019 collections. We made sure to arrive to the event at a fashionable hour where we would be able to float amongst a culture that paved the way for centuries in the world of fashion. Held in Beverly Hills, we were greeted at the door by a young man with a clipboard in hand checking off the names of those who were strictly on the list. Once inside, we were treated to a presentation for the next fashion moguls of Italian art and creativity through fabric, patterns and designs. We started off by taking photos in front of the Apart flower wall with the emerging photographer Agata Gravante . Back inside, we were offered trays of delicious hors d’oeuvres and prosecco Italian wine from an open bar as we enjoyed the ambiance of guest that were in attendance.

Once we made ourselves comfortable, we began to admire the display of clothing from several designers each showcasing their individuality with looks that they would reveal for showings within the week. I found the girls admiring one designer rack very closely with designs ranging in popping colors that were so vibrant and bold that would accentuate the melanin in their skin. Sofia Alemani  is an innovator who creates looks based off of her representation of art and culture; each piece showing the visions of her mind and the journey that manifest a world of magnetic dreams.

Her colorful way of putting fabrics together while incorporating small tokens of her personality to each styles shows that she is a woman with many facets to her visions. The way she gravitated to the girls was a relationship in the making. I saw that moment and made sure that we didn’t leave without grabbing a business card and setting up a day so that we could collaborate on another vision of her work in the near future. The following day, the girls had an appointment to meet with Sofia at the New Mart building in Downtown LA, a building that I have been very familiar where many showrooms and events have showcased the quality of fashion here in Los Angeles.

All the designers from the previous night were gathered in one room with a table of traditional Italian light refreshments for those who wanted to preview the selections before hitting the runways. While the girls started to change in some of Sofia’s original pieces, I decided to formally introduce myself to some of the other designers I hadn’t met at the event. The day was far from being a culture shock but more of a cultural experience, I wanted to make conversation with each person in the building who were creating a traditional rapport with the city of Los Angeles. While there was a language barrier, it was humbling to say that you could feel the genuine authenticity with each person. Each designer showed their own enthusiasm with us being in the room and with that amount of love made me gain the upmost respect and admiration for them and their level of influence in the world of fashion.

I walked up to the owner and the designer brand Karpet Diem, who through a translator, was able to explain to me how he came up with his innovation in styling his collection of shoes; one of the most original ideas that many of us have probably never thought to consider; carpet. Many of times it’s either a hit or miss when we try to do something that we feel no one has ever done, and oftentimes we result in over kill. But Karpet Diem shows that you can take something so underestimated in every home, whether big or small and develop it as a necessity to fashion. Each of his shoes is customarily designed with a color pattern of seven looks.

After having an epiphany, he made his first pair of shoes from a design of carpet and created even more looks translating to a form of historical art. Unfortunately, having a size 10 foot, I was unable to try any on but I made sure to have Soukeyna pair them with some of the looks she was modeling.

Two other collaborations, FrankFlo Creative Studio , created looks that were branded by using art through graphics and streetwear but with an edge that aligns with couture fashion. I had my eye on several pieces in their collection that would allow me to find my sense of style within the idea of what I would like to achieve while also fitting in the comfort to what I know. Their pieces were the designs to what they would vision on a blank canvas transferring it in the art of fashion; art that is far beyond of a logo on a hoodie or a slap of paint on a pair of jeans. What they created together is an extension to an art gallery that you could hang inside of your closet; for those who love art in its entirety, can appreciate the form of art that they collectively put together on a hanger.

I continued to watch as the girls embodied the essence of super models of this time from what this new generation of social media frenzy has downplayed. Nneka and Soukeyna are the new day in age and naturals in the making. My admiration for these two young ladies is that they use their determination, charisma and humility in an effort to build an image and name for themselves that represents their African heritage, while leaving layers of social media for the amateurs. Working strongly with the hues of their complextion, they are a force to be reckoned with and they understand the beauty in their worth. Clearly, everyone in the room recognized it as well.

The girls were a hit and what was supposed to be a go-see ended up being a day of dressing and conversations over wine, butter croissants and fried cheese potato balls. We were in the midst of a family atmosphere where everyone collectively worked with each other only to bring forth a solid community of people who faithfully understand what the fashion world means and is precisely about. It can’t get any better than that.

Thank you Apart! and a special thanks to each and every designer for their hospitality