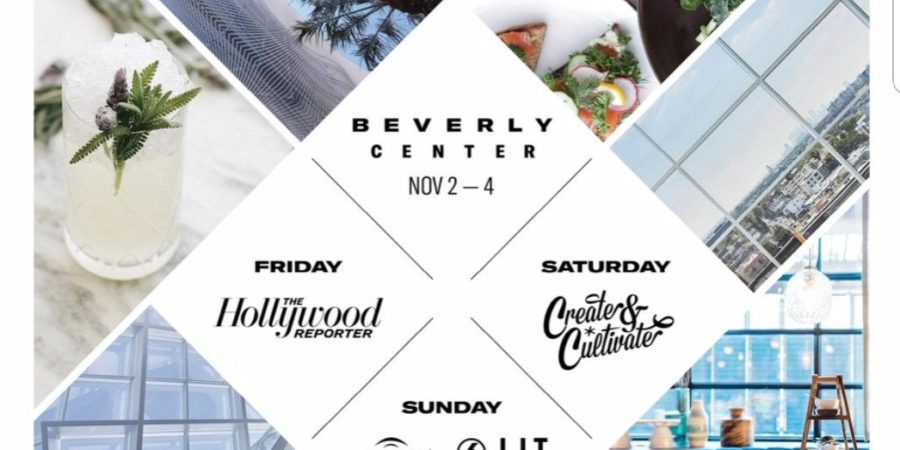 The Beverly Center has been the playground to many tourist, locals and visual images in several films throughout the course of the years. Built in 1982 just a year before my own birth, I have found it to be a staple remembrance in my life. The Beverly Center is where I bought my favorite baby blue overall dress with white knee high stockings and white Mary Jane heels during sixth grade when Clueless was my fashion icon; I was Dionne. I was there for my bi-weekly shopping trips with my eldest sister when I had an image to maintain as the best dresser in high school and didn’t want anyone else biting my style; it never failed. I was also there when my mother thoroughly scolded me for throwing a hissy fit when I wanted her to buy the perfect beaded butterfly crop top for my junior prom that I knew no one else would have. It was $150 dollars and half the attire of a full dress and my mother thought I was being a spoiled brat; but I ended up wearing it in my prom photo with our star baseball player.

The Beverly Center was also very similar to my shopping and work playgrounds in Orange County such as the South Coast Plaza adjacent to the Crystal Court and Fashion Island in Newport Beach. So I was curious to see what came of the grand reveal.

During the course of the weekend, Los Angeles started to celebrate the grand opening of the Beverly Center grand reveal with activities, pop-ups and speaker panelist ranging from celebrities, entrepreneurs and social media influencers. My best friend and co-blogger, Lauren The Leaux Project , and I have been taking a much needed hiatus from social media in order to distinctively focus on ourselves and the core of our crafts, but Saturday November 3rd was the day that our minds would once again work as one in order to progress with our future plans.

The Beverly Center and Create&Cultivate  decided to do a full on collaboration that targeted both men and women looking to achieve an open space of opportunity; that would allow them the dignified possibility in pursuing their success through the ambition of hopes and dreams. Much like the Femargent seminar events, I was looking forward to peeping my head back into the world for brighter opportunities. Lauren arrived much earlier wanting to get a seat not knowing the turn out for the public invite while I met up with her a bit later. I had already put through my rsvp but wanted to make sure that I was present for some of the key speakers. Parking was free for all the attendees as well as for the shoppers where it was just another day in the land of Hollywood.

I waited patiently as a few other arrivals checked-in but noticed a handsome guy at the desk flag me down before he had finished checking in other guest. He thought I looked familiar and wanted to hand me my wrist band as well as a silver envelope that gifted attendees a complimentary valet card till the year of 2019 as well as discounted restaurant offers. Come to later find out, he recognized me from my socialite years in the Hollywood scene. Once I was already checked in, I searched over the crowd of heads that were already seated listening to the panelist on the glittery stage. I was hoping to find Lauren’s natural head of curls but soon realized that this has been the time of Black essence in all of our natural beauty.

So I grabbed a cocktail at the open bar where I also noticed trays of hors d’oeuvres being passed around. While this was a public event, I was highly surprised at the sense of detail put into the day’s event and I knew that this would be a spark to some fresh new create adventures. While viewing the panel, one very familiar face popped up on the screen over the stage. Daniel Musto. He’s not familiar to me for being a social media influencer or fabulous celebrity stylist, but because he’s a Hollywood veteran like myself and we go way back before social media was really ever a thing.

I have always admired his growth and transition in becoming one of the most successful stylists in his fields among some of his other competitors who too have come from our social circles from ground up. While Hollywood can be a small world in a big bubble, I was starting to find it rather odd that I kept running into people from my social past all in this one days event. Was this a coincidence or a sign? Or maybe it was both.

I was able to spot Lauren sitting left to the VIP area and didn’t want to quietly maneuver my way to finding an open seat next to her knowing they would all be taken, so I chose to stand on the other side. The event was being held in the middle of the mall for much of anyone’s  view from the outskirts, but once you had access beyond the black ropes and security guards, you were amongst a sea of aspiration. The place was full. I started to wobble a bit from the grape flavored cocktail I had been sipping on and realized this was going to be a party shortly after, but I was here on a mission and honed in on some of the vital statements that the key panelist were making. I’m very selective with some of the unsolicited advice that I come across and find that not everything one says is always tangible or genuine, but the advice that was being offered on the stage held a solid place in my heart.

“Play it safe” “Don’t be so thirsty that you ignore your intuition ” and “Look for people in your real life to draw inspiration from” were some of the few key notes that I fully stand by. As a contrarian, it tends to be difficult to think things differently than everyone else who often times think the same. I absolutely respected their sense of honesty that strays away from the mental idea of a manual book when one does not fit all.

Once the first panel was done, I quickly flagged Lauren down so that we could say hi to Daniel as it’s nice to know that he has remained such a humbled person to where I can appreciate the old Hollywood I so dearly love.

I had noticed that people were carrying around sketches of themselves drawn by FIDM artist and wanted for Lauren and myself to get one of our own during the break. I have always wanted one as I have seen A-list celebrities such as Rhianna and Serena Williams have theirs drawn by famous artist on Instagram and so we decided to wait in line. Individually, each artist sketched their versions of our image and I am very happy to say that @Dusty_Do  delivered.

I can’t tell if I’m Naomi Campbell, Iman or a doppelganger of myself but I was living for that image.

The next panel session was starting to begin and Lauren recognized one specific influencer that she follows; René Daniella better known by her social media handling Own By Femme . A stunning beauty with a luscious head of curls with whom I began to admire for showing women in all ranges of melanin on her feed; something that has since been much of an importance to me when it pertains to finding an image that you can relate to. Being that Lauren knew more of Rene and her influence, I wanted to make sure that Lauren could speak to her so that we could gain better insight on how to be a part of a community that is more so for us. Earlier, I had spotted a young lady, Carmen, with a professional camera and asked for her business card so that I could give it to Lauren to connect through the same ideas and pursuit. So I wanted for us three to be a part of the conversation together. Our conversation with René was both refreshing and encouraging in seeing that regardless of a mere like or following, it’s all in the value of building that quality report. She opened a door that would allow us to look forward to new endeavors that could both be exhilarating and a different start for us.

We decided to take a mini break and head over to the restrooms where the lines were outside the door. Clearly everyone else from the event had the same idea, but we decided to walk towards the department store where stalls were of plenty. Rashida Jones was going to be the next and final speaker and she was by far a must see, so we made sure to make our break real quick. I try not to pry into people’s personal lives and regardless if I’m a fan or not, I’ve made it so I don’t focus so much on others and more on myself; only when my admiration for a person is for my own growth and introspection is when I’ll take the time and do my research. Never would I think I would be so frozen and tuned in on what a person was saying in a speaker panel as I was when listening to Rashida speak.

Her words, her truth and everything that she stands for spoke volumes where I was able to drown out all the extra noise that was around me. I remember seeing a clip of a journalist asking her a really dense question in regards to her appearing quite tanned to which Rashida responded with stating that it was because she is ethnic. Since that clip, I have respected her for speaking on topics that must be addressed and for her using this social platform in making sure that she was being heard. As woman who is both bi-racial and a strong influential woman, she does not shy away from her ethnic background and the accomplishments passed down from her father Quincy Jones whose documentary had released on Netflix September of this year.

Overall, the grand reveal was not only just a collection of people gathering to see some of their favorite influencers or celebrities, or even for a cocktail or two. It was about a transition; a connection and an awareness that each individual has the opportunity in doing whatever it is that they fully want to pursue when they don’t have to do it solely themselves.

Create and Cultivate is the name of the game!