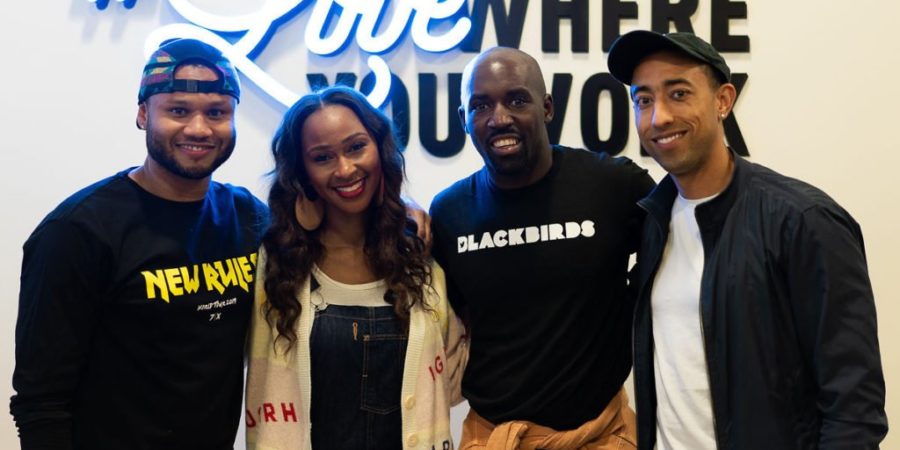 7|X is the mosaic to a media platform. If you look closely, you’ll see how one man became the mastermind in developing a way to bringing forth a stance that strives for excellence in individual accomplishments all the while building a team of empowerment.

At times, some of us often feel that we’re becoming stagnant in our lives. We might feel a lack of motivation, a lack of support or just feeling a bit overwhelmed. While I’ve come a long way from chasing a hope and a dream, I’m still not exactly where I want to be. It stems from me being too hard on myself, self-doubt and just refusing to compete in the rat race that I call social media; I don’t always see the same value in a follower or a like to validate my worth and work ethics, but this is what it has become and I find it agonizing.

When we find ourselves feeling alone, not knowing if the people that we closely associate with are on the same support team as we are on theirs, we might question if our values are often the same. Is the basis of our relationships, an all for one and one for all or every man for himself. I believe in building a strong unity within the relationships of friends and acquaintances when the odds aren’t always in our favor. I believe that when I eat, everyone else eats too, just as long as you don’t come to dinner with your arms swinging. I can’t say that everyone else shares those same beliefs though and it’s becoming more of a what can you do for me? That is until you find a group of people that give you the hope that there is a platform created for a sense of togetherness. Rahshiene Taha, the CEO and founder of the media platform 7|X did just that. Through the organic relationships of friendships and genuine bonds between like-minded individuals, Rahshiene created a platform for a community that strives to reach their ultimate greatness in this world together. It can be difficult trying to maneuver through all the Pollyanna’s of this world when every journey isn’t viewed with rose colored glasses, or  motivational speakers that give you a one size fits all spiel from the chapter of if I can do it so can you!

Rahshiene, however, makes the 7|X platform a more tangible resource; something that is more relatable than the figment of our imaginations. He created a family; a unity that is connected by our motivations, purpose and longevity all within each other. Forget the smoke and mirrors, Rahshiene doesn’t miss a beat when it comes to bringing forth a community by putting together events and social gatherings where consistency plays a part in keeping the mindsets alive, and that overall, it takes a strong community to reach an end goal.

Sometimes I don’t know which direction to go because I get so lost in the abyss of social media. Not that I don’t know what it is that I want to ultimately achieve. That’s not the problem. The issue is that I feel as if I’m the needle in the haystack and that the haystack is more in favor over searching for the needle; because it’s easier. The way that we value work ethics, drive, motivation and perseverance in today’s day and age is far more different than what it used to be when working hard for a life that one wanted, it came with a genuine sense of gratitude. There was that feeling of humility in being able to strive for something knowing that you could see everything coming into fruition without the thought of something just being handed to you. 7|X creates a space where our greatness, our passions and what we strive for is being celebrated amongst a group of people that might share that same perseverance all while achieving that greatness together.

This past week my two friends and I, Soukeyna  andNneka Ibeabuchi, were able to experience that sense of community when we attended the 7|X The Rotation workshop, Moderated by Rahshiene, hosted by Twitter Blackbirds  Anthony Brown and the lovely  Dr. Glenna Anderson  who began the event with three different questionnaires; Getting to know the room and 7Questions.

Food to fuel the soul and an open bar was offered before we began the evening. We started off with the simple exercise, getting to know the room, where we would approach different individuals asking them questions that were listed on a sheet of paper handed out to us. With each question asked, we also had to answer those very same questions as well. We needed to make our way around the room while being timed, and once that time was up, we all answered some of those questions collectively. That was the warm up. The next part of the conversation were the 7Questions which ran a little deeper for me than a game of what would you rather. Dr. Glenna talked through some of the questions and split us up into several groups where we would fill out the questionnaire in separate rooms based off the four numbers we called out.

After reading a couple of the questions, I found myself feeling a little overwhelmed. First it was the thought of having to write down the thoughts that keep me up at night every three hours during my sleep cycle. The thoughts that make me shut people out when I feel that they’re being intrusive or that it wasn’t that simple as if asking me what I’m making for dinner. These weren’t just questions. These were wounds, frustrations and trial and errors that I have yet to overcome because I don’t have the answers. When we split off into our groups, I just starred at my piece of paper. The first two questions seemed easy enough asking if I was willing to create the life that I wanted, and if there is anything that I’m excited about in my life. Well that seemed to be a given. Of course I wanted to create the life that I wanted. Was that a rhetorical question? But everyone may define the nature of that question differently and that’s where I started to analyze what I’ve had difficulty trying to emphasize to people within my journey; that I set boundaries and I prefer to do everything organically. Am I excited about the new chapter in my life? Yes I am. After the sudden passing of my best friend on December 25th 2017, I decided to venture into the broader world of blogging. I chose to write two books simultaneously; one for him and one for myself. I’m even traveling to Europe for the first time this year to make up for all the times I didn’t travel with him. The last two questions are what hit a core, and while I thought I was ready to interact with the rest of the group, I only ended up revealing my true vulnerabilities. What do you want to stop doing and what do you want to start doing?

I thought that I could be transparent. So I chose to share my response but I felt emotionally triggered when Dr. Glenna brought up the term Imposter Syndrome in the midst of me explaining my insecurities. I could barely hold back my tears because I’ve been told this a few times. Just a few weeks ago, when speaking to my two friends about feeling stagnant at my place of work, they knew that I deserved to work in a better environment as they feel that I am over-qualified. But it’s always that feeling of self-doubt where I psych myself out. While I work closely with some of the most elite people in the industry, I feel that it’s not to the standards of what I want to overall achieve.

The good thing that I found with the selection of questions is that I am able to be honest with myself. When it was time for us to gather as an entire group again, we were given another list of three questions. It took everything for me to compose myself as I felt the tears building up in my eyes yet again. I didn’t want to answer any of these questions; I didn’t want to write down a form of affirmations that aren’t realistic but just seems to be a process that I’m at odds with. Trying to channel something that seems to lack truth in its meaning is possibly the most frustrating thing when it funnels down to practical illusions. While people swear by the best-selling books; The Secret by Rhonda Byrne, How to Win Friends and Influence People by Dale Carnegie and Awaken the Giant Within by Tony Robbins, I’ve found books such as Quiet by Susan Cain and Not another Motivational Book by Joanna Jast more authentic in their delivery. It’s all about being authentic, being organic and not trying to live through the façade of everyone else. Not basing my goals off the idea that if I do things according to what everyone else is doing or play the numbers game, then all my problems will be solved. That if I put it out into the universe then everything will be just so and that’s just not how everything works whether we want to accept that or not. I’ve accepted that I’m a contrarian and that I’m unconventional to the world around me, but regardless, I continue to work through it.

The last three questions were: What are your top 3 goals in the next year? What are your plans to achieve these goals, and what are the key lifestyle adjustments you need to make to achieve these goals? Who would think that these three questions are what triggered my anxiety or an analytical response; maybe because that would require more depth and introspection, but that’s what separates 7|X and Rahshiene’s mission from others. He wants people to be present and honest; not only with themselves but also with the community of people making it a cohesive culture. By doing this, he highlights individuals that can set a bigger example that reflects what real people look like that tend to fall prey to the social abyss. Everything that Rahshiene and 7|X stands for is what I want to fully incorporate into my journey.

Reading the questions now, blank and unanswered, I don’t feel my anxiety creeping up. What I find easier is to continue doing the work; surrounding myself with like-minded individuals who share a sense of that same motivation and passion and in turn, projecting that onto others. I truly enjoy sharing the wealth. When I see that same potential in someone else, I’m more than willing to help them get to wherever it is that they’re trying to go. I know that I can be just as much of a cheerleader and support system to someone else without always seeking something in return. What people need to understand is that some of the most organic accomplishments and success stories take time and that I am in no competition with anyone other than myself. I’m okay with that, because at the end of the day, I’m still making little moves at a time that adds value to my journey and that’s okay one day at a time.

I thank the entire 7|X family for furthering that faith in me and instilling the hope that diminishes in my insecurities. From one gem to another, I thank you.