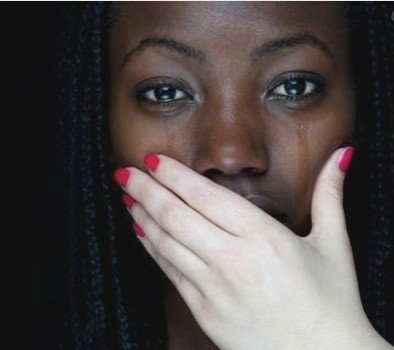 If you fail to answer these question with honesty and integrity, then I question your character as to why you feel the need to show racial hostility towards those who do.

Just recently, I involved myself in a comment feed where an acquaintance and former friend had written something that alerted my attention. Lindsey Morgan, had made it clear that while it was all in her opinion, she firmly disagreed with the current stance of our NFL. While I don’t always engage in controversial topics or news feeds, her comment struck a nerve. Not because she had every right to her opinion, but because in light of all the racism plowing through this country more than I care to see, I questioned her as a person and the friend I once thought I knew.

I remember her as the docile woman I once worked with, and would always encourage to stand her ground against the misogynist we once worked among. She always had the brightest biggest smile with excessive amounts of lip gloss; big bright eyes with clunks of mascara that showed a gentle nurturing soul. I admired her for being a mother of three, which later came to be untrue. A red flag should have alerted me then as she hid behind unnecessary lies. What I once admired her for, I have now felt discouraged that she was never that unbiased person at all, and just another form of a chauvinist. 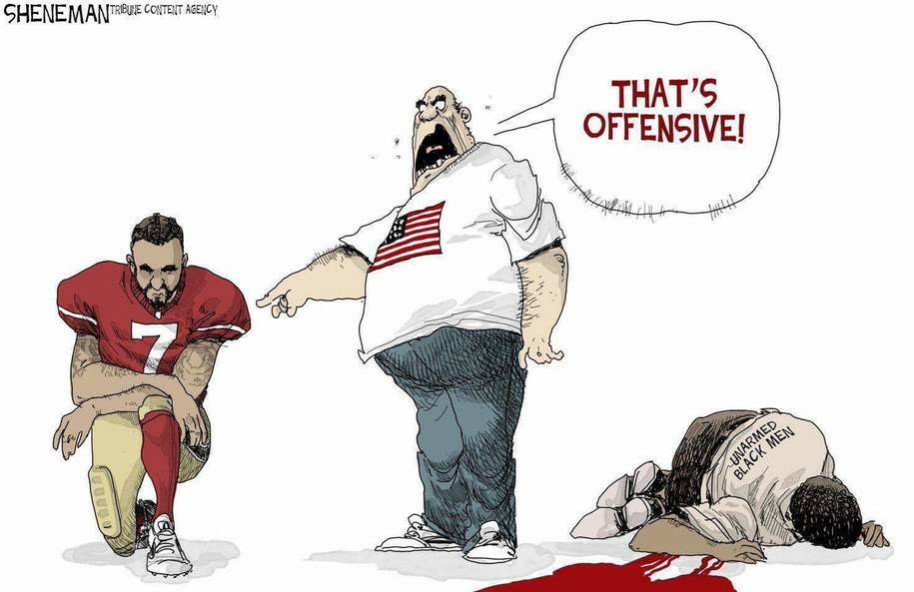 She has become a reflection of an oppressor, a wolf in sheeps clothing.

I, the only black person, decided to confront her ignorance. Not with hostility but with disappointment that she couldn’t understand the premise of what is and has been going on in our country. 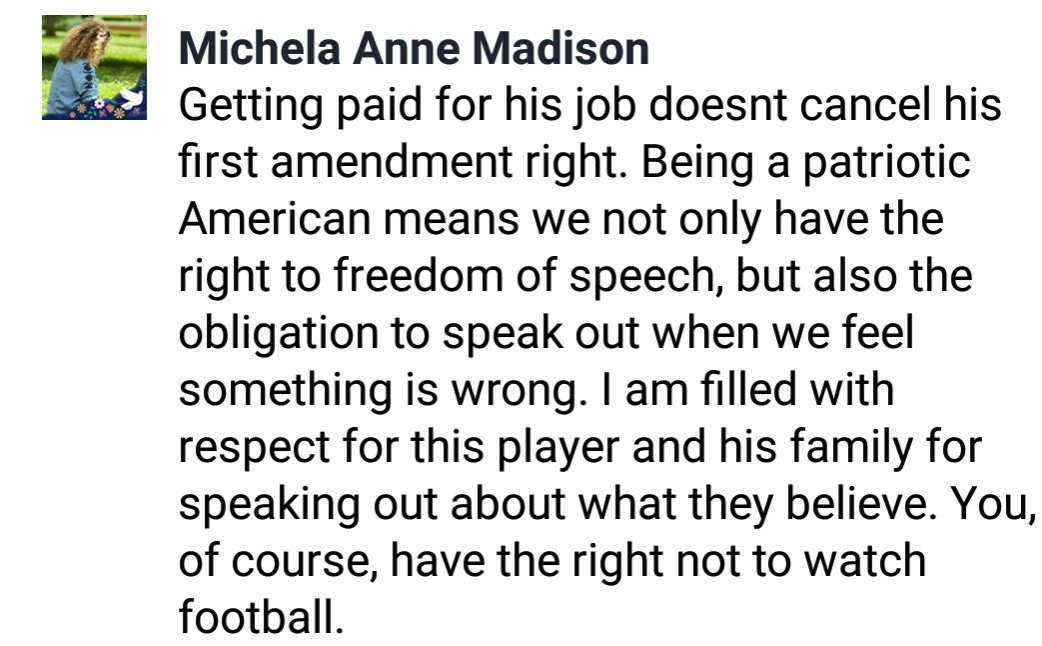 Stating that these NFL players are not just only good for her mere entertainment. That they are not just paid millionaires to play a game that she feels her children won’t look up to. That these men, who make enough money, shouldn’t have to ignore their social consciousness of being an idol to a black kid whose reality may be far more different than that of her children.

She made it very apparent that these men were not worthy of their rights to their 1st amendment. They’re not worthy as individuals to take a stance that they fully support. They’re not worthy to protest in silence, and they’re not worthy of an identity underneath their jersey. Why, because she, like many others, continue to silence the speech that they so freely speak like in my Anti Black Voices. The same silencing antics they whimper over if it’s in her favor over a damaging rhetoric that perpetuates the actions to which the kneel became.

I made her aware that while she claims to have respected their rights to their freedom of free speech, the context of her statements shows otherwise. Her contradictions states that she’ll only respect their rights as long as it’s under the form of totalitarianism. A dictatorship that is reflection of oppression. Oppression that is in the history of Blacks and African Americans living in a privileged white world. The privilege that doesn’t deem a Nazi as a racist white supremacist, but a black person as an ingrate because he understands this country widely. As if we should be ever so thankful to our oppressors and aggressors for giving us the freedom of being in this country. The same country that she, like so many, tend to tell those to leave as if they’ve earned the rights to this same country that was stolen property. So when and where, other than a locker room as Lindsey suggested, should a black person practice their Freedom of speech to be heard. 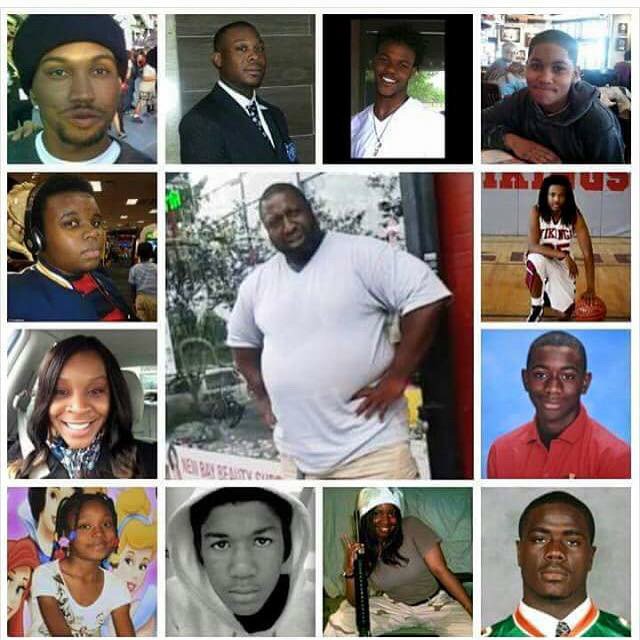 I soon realized just how callous she was in her skewed logic and rationality. Shes handicapped herself from understanding the depths to a protest that counters the same hate and racism these players are kneeling for. Yet, I’ve never seen her to be so distraught when it just wasn’t in her favor to fit her narrative. The narrative, like her friend tried to assume, that these people are just thugs, criminals and a menace to our society and nothing more. That these people had nothing else to live for other than to be spat on by the same patriotism that continues to spit on their graves. So much for All Lives Mattering.

In fact, I’ve never seen her stand, sing nor place a hand over her heart during an anthem while serving beer to the same customers, who in turn, never did the same. So what truly defines Patriotism.

When I suggested she broaden her knowledge, she claimed she had two degrees, but in what? Oblivion and wilful ignorance?

Of course the conversation took a turn when I found myself in the likes of her brain wired corrosive friends, that were so different from the broad diversity we once shared. The mentions of Martin Luther King, as if they’ve ever been consistent in respecting his whole being as they continue to disrespect those that are following in his foot steps to counter the very same thing he once did. Stating that these NFL players should protest like MLK. The same protest you’d find in the streets, but that too was never okay. Though, as long as peaceful protest doesn’t interfere with their everyday lives of delusions of living in a perfect world. 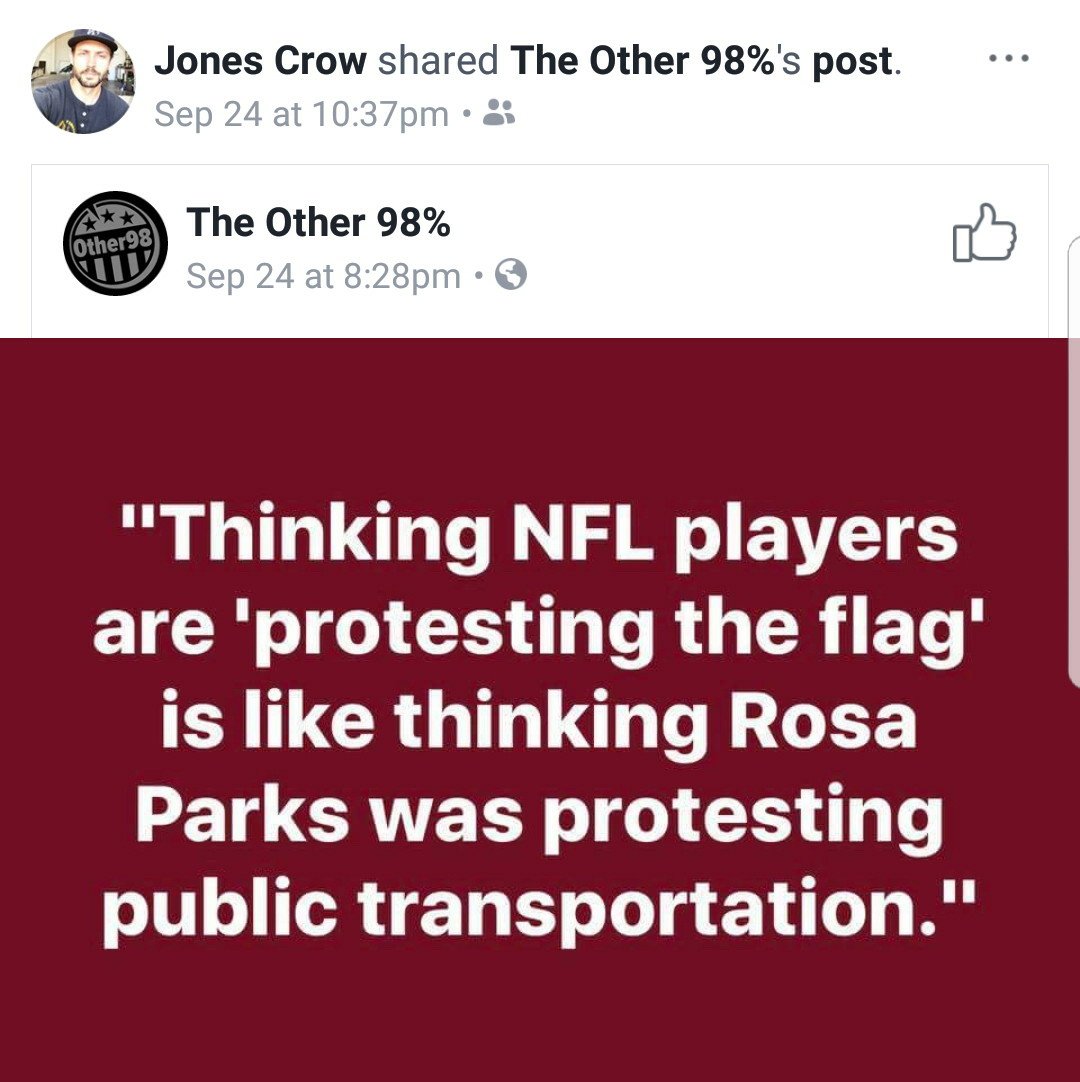 The common diversion of reciting unoriginal presumptions, Black on black crime, all black colleges, single parent homes, government assistance and assimilation, because they haven’t invested the time nor energy to learn something enlightening instead of having their minds coddled. They cringed at the idea of having a productive conversation in order to hear something outside the comfort of each other. They cringed that I, a black woman, dare inform them of what it’s like to be a black person in America because they are not nor willing to understand. Although I might have grown up differently than her abrasive friend could possibly have ever imagined. Quite the opposite life from an interrogation of questions that she wouldn’t have asked herself. What have you done for your community, what have you done for our vets, I’ve done far more than you have I can bet.

Why, because it was never about her patriotism. 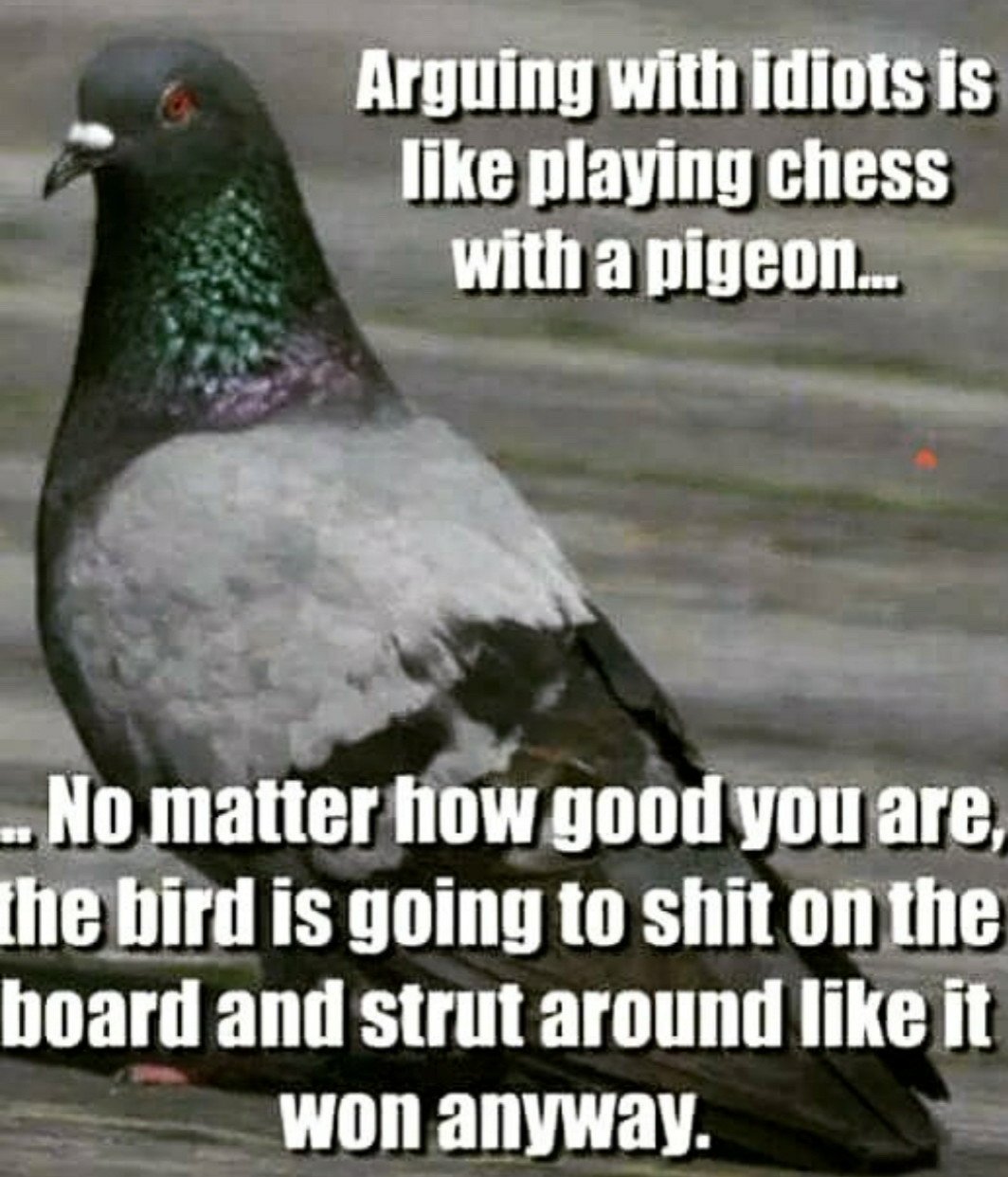 Given that I pointed out that while we were younger in age when the roots of the national anthem wasn’t revealed, history and the way of our education was entirely different from what it is now. We were deprived through distortion and manipulation which many, like Lindsey, tend to struggle with today.

The issue with reading comprehension and selective reading as a whole, encouraged them to ask redundant questions that only a simpleton would ask as a tactic to act out a defense mechanism.

You see, as a child, I sang the national anthem then because I didn’t know any better from what I know and understand today as an adult. I wasn’t aware that the song was written with four versus by a racist. I sang the song because I was under the impression to conform and wasn’t given an alternative in my right to doing otherwise. Here today, I am no longer stagnant.

Why, because it doesn’t affect her and she doesn’t have to feel offended. 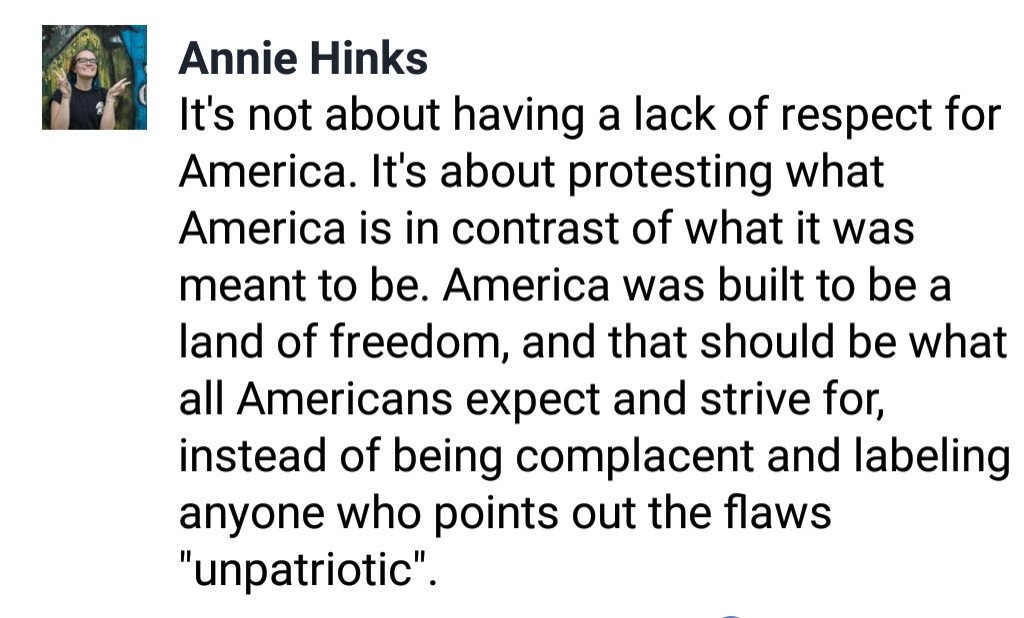 What her and her rigid group of friends fail to see through their glossed blinders, is that this isn’t just about a song and a flag these men were never paid to honor. This is about the persistent injustices of the country, she and those like her, are so fond of. The country that has never stripped them of their dignity and character.

This is about principles, and unfortunately, the anthem and the flag don’t fully represent those same principles in the same light as they do herself.

Of course, this is the part where they showed signs of difficulty in separating themselves and the reality of their lives from those whose shoes they don’t walk in. What they’ve not experienced for themselves isn’t an experience for others. What they’ve not seen and or witnessed just doesn’t occur at all. When the conversation becomes too much to bear, they have better things to do. Better things to do while telling these men that they’re not man enough for a little empathy and prayer. They’ll flip a switch the moment they become too uncomfortable.

A pattern that shows that they’d rather turn a blind eye because that suits them perfectly, they’re soul deprived and hallow inside. They rather contort the narrative diverting from the main topic at hand, and watch through rose colored glasses that fit them just fine.

While in the midst of her and her friends speaking for every veteran as if to be their mouth piece, the irony is far from the truths they refuse to accept. That veterans fought for our rights in every way that Lindsey and her friends feel they have the right to deny these men of. They’d rather refer to these men and woman, who fought for our rights, of being the real life personas of what America is. They define their own labels and dictate their own approvals when really they’ve manipulated those same values for the rights we continue to fight for now. 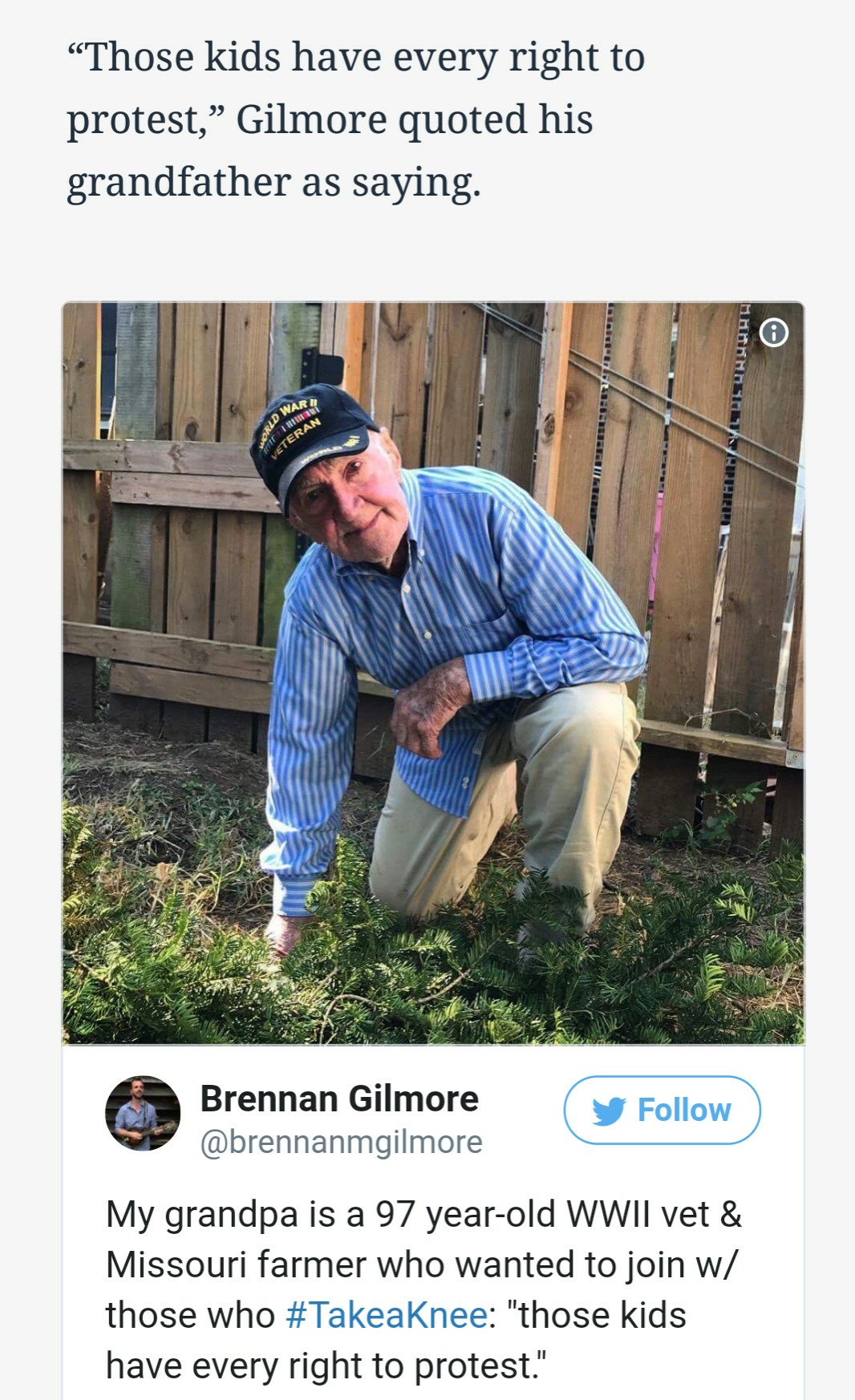 I notice a common trend that the moment a person like herself, is called out for their lack of character and more for the content of their character, they become enraged. What I found odd is that the moment I mentioned the perception of her knowledge, she became offended. So much that she unfriended me. Yet, the depths for a kneel doesn’t share that same feeling.

That was her stance; that’s primarily what she stood for, is to silence those who speak up and speak out against the very thing she has become. Heartless and cold.

I saw right through her sorry justification, as well as her friends. This was never about them being patriotic, because if it were, she’d know all the things that are not. She’d understand that the only reason why there is a racial divide, is when there’s a coin toss for issues that deem fit to ridicule more than another based off of who’s involved and what skin color they are. 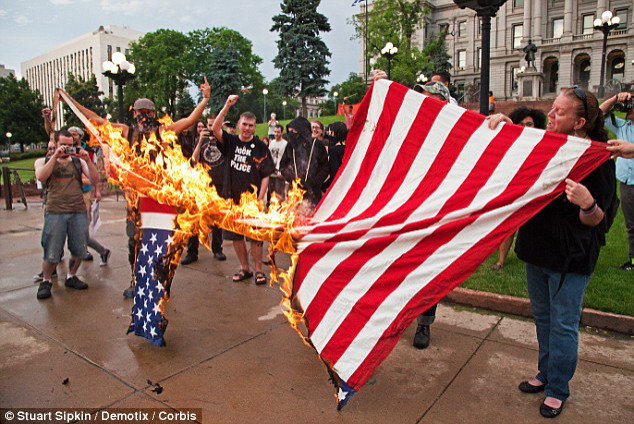 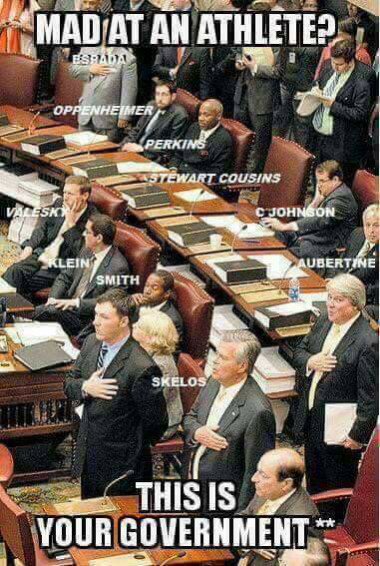 In truth, she had no respect nor tolerance for my opinion. What combats her warped moral ground is met with a sense of fear and only fear. They fear that we are NO longer our ancestors. That times are changing and that people are becoming the voices of their ancestors who were treated no different than at the hands of theirs.

You will not silence me Lindsey Morgan not today and not ever. This is not an opinion, this is a crucial fact.