With everything going on throughout the world, Social Media, News events, people are becoming more aware and traumatized by the nature of our society and all that surrounds us.

Every day we are dying off as the human race due to hate, suicides and poverty stricken volumes that hits at a rate faster than a meteor. And every day I become weakened by that grief that I don’t necessarily endure myself, but from what I watch on a daily basis. Even more so I’m disgusted by the lack of humanity by my neighbors. Former friends, current enemies and some just trying to stay relevant.  It hurts my soul that in this day in age we find ourselves taking two steps forward, and too many steps back when we think that we’re sharing one language.  That language being Love.

Okay so it’s not an actual language, but we can all understand it in its depth. The heart becomes the mind when we exhale the thought of it beating. (“Thinking” with our hearts) I become exasperated by the cruelty people have when that should be the place for serenity.  That cruelty can also be in the act of thankfulness, though many would disagree. They feel that they’re living in an entirely different world through their state of mind, when really they’re further creating toxicity throughout that thought process.

I’ll give you an example. “Just be happy you have a job, and you’re not homeless”…. or “It’s not our fault”

When a person is uncomfortable in his/her surroundings of a negative environment, they immediately latch on to all the blessings that they have instead of retracting that way of thinking, and wanting to bless others. One way would be that while you’re grateful for not being homeless, maybe giving your time at a homeless shelter all while being “Thankful” you’re not homeless. Food for thought. That alone takes a negative reflection and turns it into a positive. 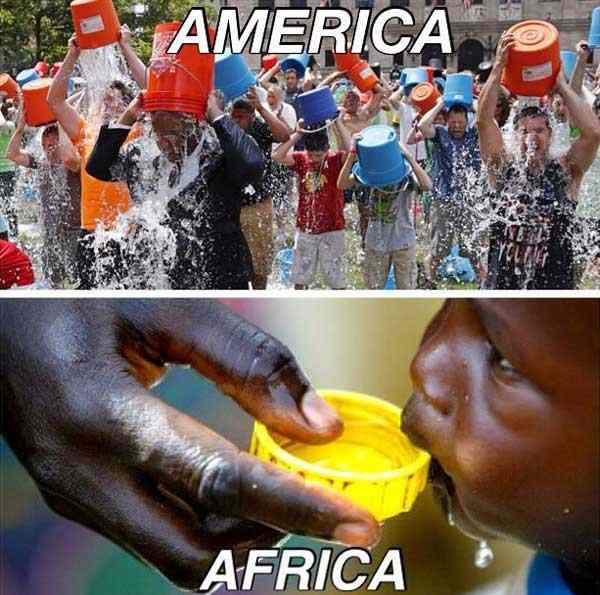 This photo alone created some of the most vile and hateful comments on my news feed when someone with good intentions posted this up all to make a statement.  It makes me disgusted to even be associated with the Americans that I share my water with. While many understood the point, many disregarded the correlation of doing a good deed and decided that on their terms, one was better than the other. Basically while supporting the ALS challenge that will be in another journal they snubbed the fact that there are also ways of reaching out to those that don’t have our smallest riches. So everything that they stood for in being a “Charitable” person they completely defeated the point of what being charitable really means. Double Standard. You know when I am feeling blessed it just comes natural to me to want to let the world know just how blessed I am. Whether it be a smile, or giving a tip at Starbucks sometimes I even go to the extreme.

I’d say about several months ago when approaching a red light, I had noticed that a young woman had missed her bus. I was sure the next bus stop wasnt for another two lights. Now typically those “Thankful” types would either laugh at her situation while blowing up the air/heat in their cars or they’d say “Glad that isn’t me” typical right? Okay well I contemplated giving her a ride. I mean what would be the harm…. okay well I could think of a lot of things…but she must have read my mind because while she noticed I was in a train of thought and glancing right at her, she desperately asked if I wouldn’t mind the gesture. Of course I asked if she was clean Weapons she had nothing on her and I let her jump in my front seat.

I found that she had just moved out here and was in the process of moving her belongings into her new apartment by bus. I could only imagine how exhausting that was. I drove off unscathed and went about my business in hopes that she then could pay it forward. That’s all it takes…really.

A mother on a $7 budget to feed herself and her children with an order of fries and water, that tugs at your heart. As their server I know the difference between being cheap! and just being on an extremely tight budget. So I either offer them the free  employee lunch I’ve grown tired of for the last three years, or find other alternatives that won’t “Take away” out of a million dollar companies pocket. Im thankful that at the end of the day whatever little I could offer that family I’ll make it back in mins, and I’d do it again.

Once we all can alternate our way of thinking, we can move forward as one. And for those who have been or are in the position of lost hope, never take for granted and be gracious by wanting more for the world that we all live in.

That my friends is being “Thankful as what someone who is thankful, does”